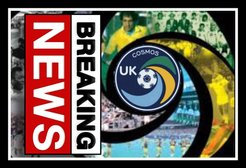 Some bigs Names too Join Cosmos on the day!
Paul First Team Manager

After a fragmented season threatened by Covid rearing its ugly head again and the failure to keep the reserves running and a weak season for the first team due to poor commitment and availability, the focus became keeping the club running and even having a club at the end of the season.

This season with a much better set up early doors with coaches in place, and new players in place early the gaffer could focus on getting the partnership back up and running and raising money for this cause that is very close to the manager's heart as he has suffered from mental health issues himself for the past 5 years and wants to use the platform of football and team sports in promoting mental health issues.

FRIENDLY MATCH AGREED :
Cosmos will play Bristol Manor Farm on Sunday the 21st of August 2022 with a 12 pm kick-off at the Creek (BMF Stadium).
Massive thanks to BMF Manager Lee Lashenko for agreeing to arrange this event, the details will be released closer to the event regarding match day tickets and events that will be available along with additional sponsors for the event.
So put Sunday the 21st into your diary and more information to follow soon.
UTC